Brayden Sier has missed the past three matches with a calf injury
INJURED Collingwood midfielder Brayden Sier took to a local basketball court on Monday night amid the Pies’ mounting soft-tissue crisis.
Sier, who will miss his fourth consecutive match this weekend with a calf setback, is understood to have played under a pseudonym in a Diamond Valley Basketball Association Division 3 match in Greensborough.
Two eyewitnesses told Remsport Sier played around 20 minutes and was lodged on the teamsheet as “Phill Inn” in an attempt to conceal his name.
Sier (left) running laps with injured teammates Jordan De Goey and Ben Reid. Picture: AFL Photos

However, when contacted, the Pies said Sier told them he was simply at the venue and shooting around in breaks while watching his friends as a spectator in the match.
This is despite a pair of onlookers saying they were amazed to find a professional footballer playing despite knowledge he had been battling an injury.
An opponent in the match also commented on the Pies’ official Facebook account on Tuesday to query the legitimacy of Sier’s calf injury after sharing the court with him.
“A player even said to him what are you doing playing domestic basketball and he (Sier) just gave him a cheeky smile,” one witness told AFL.com.au.
A prominent junior basketballer before he was drafted to the Pies at the end of 2015, Sier is said to have worn No.99 for the ‘Panthers’ who won the competitive match 38-33.
The Association website shows listed player “Phill Inn” scored six points.
It is believed after spotting Sier, and questioning his involvement under the alias, opposition players discussed the possibility of taking it further with the league before deciding against it.
Sier’s last game was against GWS in round 18. Picture: AFL Photos

Sier joined his Pies teammates for an offsite session at Trinity College on Tuesday morning but was later ruled out of selection for this week’s trip to face Adelaide due to the calf complaint.
It comes as the Pies battle turmoil at the selection table with 10 first-choice players currently sidelined through injury.
FULL INJURY LIST Who’s ruled out and who’s a test?
Superstar forward Jordan De Goey and Darcy Moore are the latest to have been ruled out of the clash with the Crows.
Sier spent much of the early parts of the 2019 season in the VFL before earning a senior recall in round 12 and played six matches straight.
He has not played at any level since the Pies’ loss to Greater Western Sydney in round 18.
The 21-year-old made his AFL debut last year and played 12 consecutive games including the Grand Final, impressing with his work as an inside midfielder against some of the game’s premier inside midfielders.

@AFL
Brayden Sier kicks his first goal in the AFL!#AFLPiesLions 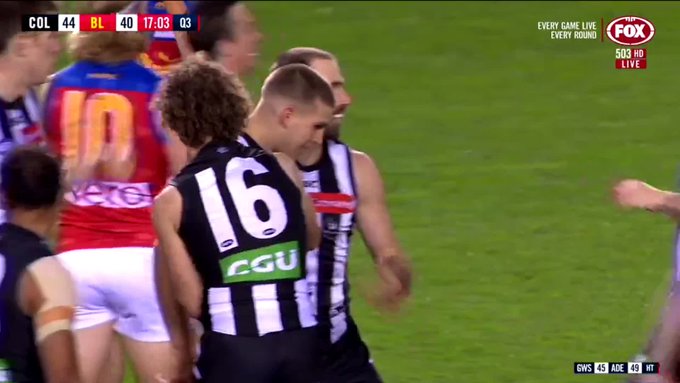 See AFL’s other Tweets
He has intentions to stay at the Pies beyond this year but remains out of contract at season’s end and is being monitored by several clubs chasing a big-bodied midfielder.
AFL players have long been warned about risking injury away from the football field.
Melbourne’s Christian Petracca missed the first five matches of 2016after breaking his toe while attempting to dunk a basketball in his backyard.
Port Adelaide co-captain Ollie Wines required shoulder surgery in January after a water skiing mishap and sat out the opening fortnight of the season.
ADVERTISEMENT
Previous Post

Neymar to take pay cut if to rejoin Barcelona

Hazzard out of Celta vigo clash