Official | Lille announce the signing of 20-year-old Nigerian attacker Victor Osimhen from Charleroi for a reported initial €12m
The 20-year-old has signed a 5-year contract with Les Dogues and replaces Rafael Leão in LOSC’s squad, the the Portuguese on his way to completing a €35m move to AC Milan
Speaking after the deal he said 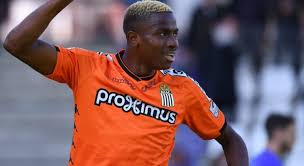 “Lille is a very good club that has a high quality project and attracts players with great class, even more so than ever before in recent years.

“Great Nigerian players have also played here. I want to commit myself to following in their footsteps. I am therefore very happy to be here and to join this great club called Lille.

“I am still very young, I am learning and I think that this project suits me perfectly to continue to progress.”

Osimhen had summer trials with Belgian clubs Zulte Waregem and Club Brugge, who were the reigning champions. However, a summer bout with malaria had affected his physical condition, and neither club decided to take him on loan. On 22 August 2018, Osimhen joined Belgian club Charleroi on a season-long loan deal, having failed to score in any of his 16 appearances with Wolfsburg. He replaced the departed Kaveh Rezaei, who was sold to Club Brugge after scoring 3 goals in the first three games of the season. Osimhen made his debut on 1 September against Excel Mouscron, entering as a late substitute for Jérémy Perbet. Osimhen made his full debut on 22 September, scoring his first goal as a professional with a backheel against Waasland-Beveren. Waasland-Beveren would equalise against 10-man Charleroi, and Perbet would later get sent off in the game as well, aiding manager Felice Mazzu’s selection up top. Osimhen would start with Adama Niane for the next four games, scoring the club’s only goal in losses to Cercle Brugge and Gent. He also scored twice in the last five minutes 3–2 win over Zulte Waregem on 21 October, after Hamdi Harbaoui had given Waregem a 2–1 lead with a second half brace. Osimhen was not dropped from the side until 25 November, when he scored a goal off the bench in the club’s 4–2 win over Lokeren. After the game, Osimhen told BBC Sport that he had “found his happiness again”. Osimhen finished the first half with 8 goals in 16 games, second only to Cristian Benavente in the team.
After a successful spell with the Belgian side, playing 36 games and scoring 20 goals, Charleroi activated their option to acquire Osimhen following his satisfactory performances while on loan.
Osimhen was named to the squad of the Nigeria under-17 team that won the 2015 FIFA U-17 World Cup in Chile, where Osimhen won the Golden Boot and Silver Ball awards. His performances also earned him the CAF Youth Player of the Year award in 2015. Osimhen made his senior debut for Nigeria in a 3–0 friendly win over Togo on 1 June 2017.
Osimhen missed out on Nigeria’s 2018 FIFA World Cup campaign after his inconsistent season at Wolfsburg. Following a successful start to his loan spell at Charleroi, he was recalled by Gernot Rohr for the November 2018 international break, starting their friendly win over Uganda.
In March 2019, Osimhen was released from the Super Eagles squad to represent the Nigerian U23 side as they were two goals down against their Libyan opponent. He scored three goals in the return match against Libya in Asaba.
Osimhen was listed in coach Gernot Rohr’s 25-man provisional list for 2019 Africa Cup of Nations tournament in Egypt and was further listed in the final list for the tournament. In the match for third place, he replaced the injured Odion Ighalo at half-time in the team’s 1–0 victory over Tunisa.
ADVERTISEMENT
ADVERTISEMENT
Previous Post

Modric wants to play with Mbappe at Real Madrid.